SACYR Agua is a water treatment company established in 1995 and belongs to the Spanish group Sacyr.

Desalination is the major specialty (design, construction and operation) of Sacyr Agua. It is one of the 10 largest companies in the world in this sector and has proven experience in providing large plants worldwide, with more than 1.6 million m3 / d installed in reverse osmosis plants in different countries and the largest RED (Reverse electrodialysis) plant in the world (200,000 m3 / day). They have designed and executed the largest desalination plant in the world with ultrafiltration technology as pretreatment in Ashdod (Israel), with a production capacity of 384,000 m3 / d.

Sacyr Agua has also built many large wastewater treatment plants, including plants with tertiary processes or new technologies such as the MBR (Membrane Bio Reactor) systems.

Sacyr Agua has extensive experience in the use of desalination for agriculture, with the construction of more than 20 plants for this application, including operating and maintenance contracts that are currently operating, such as the Águilas-Guadalentín desalination plant, with a capacity of production of 210,000 m3 / d. This ensures the irrigation of 9,600 hectares of extraordinarily productive and competitive agricultural land.

The Department of Research and Development of Sacyr Agua has carried out several research projects in the field of water treatment, mainly aimed at reducing environmental impacts, reducing consumption and improving quality. In the case of desalination for agriculture, in 2013, Sacyr agua carried out in Australia the R & D project “Opportunities for desalination in Australian agriculture”, in collaboration with CSIRO and NCEDA. 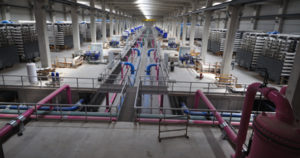 The objective of this project was to provide a national assessment of the viability of using desalination technology to address the problem of water scarcity and to improve water supplies to agriculture and industries, with the aim of increasing productivity agricultural of Australia.